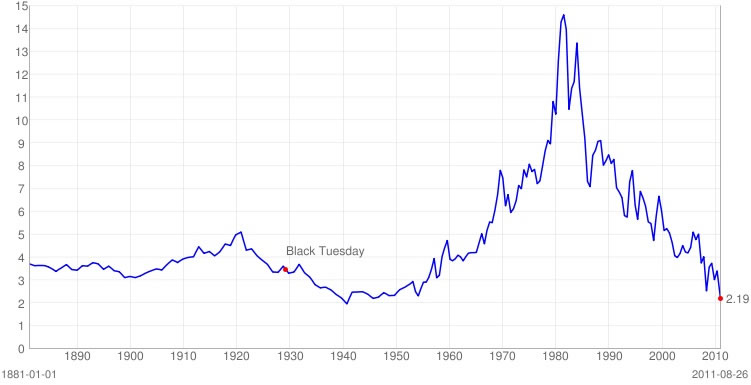 On August 6th after S&P downgraded the U.S. debt rating from AAA to AA+ with a negative outlook, NIA prayed that Americans would not make the mistake of buying U.S. Treasuries as a safe haven. We normally don’t pray about economic matters, but only God can save the U.S. economy today as well as investors who have been brainwashed into believing U.S. government dollar-denominated bonds are a safe place to store wealth. Unfortunately, only when hyperinflation arrives will the majority of American citizens realize that fiat U.S. dollars should be used as a medium of exchange only and not a place to store wealth.

Since NIA was launched two and a half years ago, the overwhelming majority of our economic predictions have come true, with many of our accurate predictions being unique only to us. Sometimes we are a bit early with our predictions, but they almost always eventually come true. One of our predictions that we have been wrong about in the short-term, but will be proven right about later this decade, is the collapse of the U.S. Treasury market.

We thought there was a chance that many Americans would once again make the mistake of buying U.S. Treasuries during the recent sell-off of global financial markets, but we were shocked to see the yields of some U.S. Treasuries such as the 10-year bond, decline to new record lows. The yields of many government bonds have fallen through their lows of late-2008, but unlike the liquidity crisis of late-2008 when gold prices declined to a low of $720 per ounce, gold futures on August 22nd reached a new all time nominal high of $1,899.40 per ounce.

NIA likes gold as a bet against the U.S. Treasury market, which we believe is the largest bubble in world history. Any investor buying 10-year Treasuries with a yield of only 2.20% needs to have their head examined. Based on official Bureau of Labor Statistics (BLS) data, year-over-year price inflation in the U.S. is already 3.63%. NIA estimates the real rate of price inflation to currently be approximately 8% and we project real price inflation to reach double-digits next year. NIA finds it very unlikely that the U.S. will be able to survive the next ten years without hyperinflation.

With the help of NIA’s critically acclaimed economic documentaries including ‘Meltup’, ‘The Dollar Bubble’, and ‘Hyperinflation Nation’ that have been seen by millions of people, a larger percentage of the investment community is educated than ever before about the currency crisis that is ahead. We estimate that about 1/10 of our country now finally understands that as long as we are running massive budget deficits with our government making no real attempt to cut spending in a meaningful way, gold will keep increasing in nominal value and the U.S. dollar will continue losing its purchasing power. However, 9/10 of our nation still doesn’t understand why they should own gold and would chase after $1,000 in cash being blown by the wind before picking up a 1 oz gold coin lying below them on the ground.

Investors today are buying and selling assets based on what they perceive to be risk assets and safe haven assets. Market volatility is now at a level last seen in March of 2009 towards the end of the last financial crisis. On days with either positive economic news or rumors that Bernanke is getting ready to unleash QE3, stock prices rise while the prices of both gold and U.S. Treasuries fall. On days with either negative economic news or rumors that Bernanke is unlikely to unleash QE3, stock prices fall while both gold and U.S. Treasury prices rise. Investors are buying both gold and U.S. Treasuries as a safe haven. Those buying U.S. Treasuries as a safe haven are doing so based on the market’s actions in late-2008 when Treasuries rallied with the stock market collapsing. They fail to realize that every financial crisis is different and the next crisis will be nothing like 2008.

In 2008, we had a crisis due to a lack of liquidity. Today, the world is flooded with liquidity, but most people don’t realize it yet because trillions of dollars are being hoarded on the sidelines and not chasing goods and services. Nobody knew for sure in 2008 how the Federal Reserve would react to the liquidity crisis. If the Federal Reserve did the right thing and allowed banks to fail we would have experienced many years of deflation. The Federal Reserve has made it clear that they will print enough money to bailout all major banks or other companies deemed “too big to fail”. We are in a situation where the worse the economy gets, the more money the Fed will print and the higher prices of all assets will rise.

NIA predicts right now that over the next 16 months between now and the end of calendar year 2012, we will see the largest short-term increase in 10-year bond yields on a percentage basis in history. With CPI growth increasing for eight straight months and even the Fed’s misleading core-CPI growth up 290% since October on a year-over-year basis, investors will soon realize that it is far too risky to own bonds that are paying such low yields.

President Obama yesterday nominated Alan Kreuger to lead his Council of Economic Advisers. We laughed when he heard Obama tell Kreuger that it will be tough for him to fill the shoes of Austan Goolsbee, who recently left his post to resume teaching at the University of Chicago. Whether it be Kreuger, Goolsbee, or Christina Romer (who preceded Goolsbee), they are all Keynesians who believe that more government spending and intervention is the key to bringing down unemployment and having a healthy economy.

Krueger worked in the White House during the first two years of the Obama administration as assistant Treasury secretary for economic policy. Krueger received his Ph.D. in economics from Harvard University and has worked at Princeton University since 1987, where his mail frequently gets mixed up with fellow Keynesian and New York Times op-ed columnist Paul Krugman. Krueger is the author of a book that was written solely to convince readers that having a high minimum wage doesn’t cause unemployment. It should be common sense to all NIA members that if the government raised the minimum wage to $50 per hour, unemployment would rise dramatically as most jobs paying wages below $50 per hour would be destroyed. The truth is, eliminating the U.S. minimum wage would create thousands of new entry-level jobs in America and help lower the unemployment rate. Krueger was also instrumental in developing the “cash-for-clunkers” program, which NIA has written about on many occasions as being a monumental disaster for the U.S. economy.

It is absurd how the mainstream media calls Ron Paul an extremist for wanting to eliminate government intervention in our financial markets, reduce government spending, balance the budget, stop the Fed from printing money, and return to sound money. In NIA’s opinion, Krueger is the real extremist. If there was no minimum wage and there never was “cash-for-clunkers”, many unemployed 17 year old kids who are home on Facebook, could instead be out earning enough money to buy their own used car. The youth unemployment rate is currently double the overall unemployment rate and used car prices are up 20% during the past year, because of the policies supported by Krueger.

The U.S. government used “cash-for-clunkers” to buy phony GDP growth in 2009, stealing from future automobile sales. After the “cash-for-clunkers” program ended, General Motors reported that their sales in August of 2010 declined 25% from sales in August of 2009. NIA predicted on September 1, 2010, that this would lead to a sharp contraction in GDP growth and cause the Fed to unleash the mother of all quantitative easing. Two months later on November 3, 2010, the Fed announced $600 billion in additional quantitative easing.

GDP growth in the 4Q of 2010 declined to 3.14% on a year-over-year basis, down from 3.51% in the 3Q of 2010. GDP growth has continued to decline lower this year to 2.24% in the first quarter and 1.55% in the second quarter (which was just revised downward from an initial estimate of 1.62%). The BLS used a price deflator of only 2.5% in the 2Q. In our opinion, real GDP in the U.S. today is already in negative territory. With it becoming increasingly likely that official year-over-year GDP changes will become negative by the end of calendar year 2011, it is only a matter of time before the Federal Reserve unleashes QE3 in disguise under a new name.

With the Federal Reserve no longer reporting the M3 money supply, the broadest measure of money supply currently reported by the Fed is M2. During the past few weeks, the U.S. has been seeing a very alarming rise in M2. The M2 money supply has risen $228.5 billion over the past four weeks to $9.5218 trillion. On an annualized basis, this equals a 32% increase in M2. Much of this gain can be attributed to people moving funds from institutional money funds and large time deposits into checking and savings accounts. Investors are nervous about the state of our economy and as soon as the investment community begins to realize that the next economic crisis will be a currency crisis, not a liquidity crisis, we will see the world lose confidence in the U.S. dollar and rush out of U.S. Treasuries and into gold, silver, and other real assets.